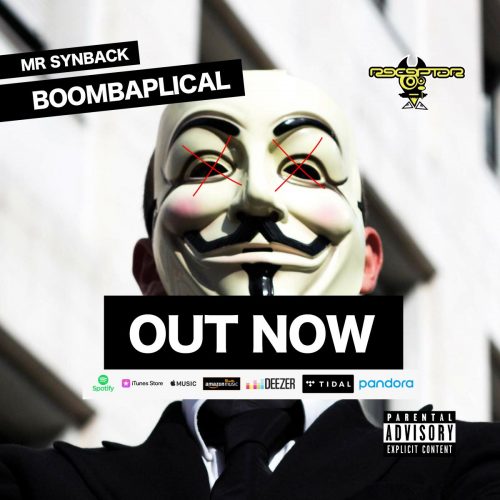 Boombaplical is available digitally from 15 May, with a limited vinyl release to follow

Having fallen in love with hip hop and its burgeoning cultural movement in the midst of one of its golden eras, Mr Synback has continued to channel that 90’s spirit into his music, with his debut standing as a contemporary testament to the merits of boom bap. The

Boombaplical is a neck-snapping, hard-rhyming burst of rap that verges on the brink of hardcore, thanks to a combination of cutthroat rhymes from Mr Synback and a stack of weighty beats from producers across the capital. From the jazzy stomp of Bare Beats’ production on the opening track to the thoughtful string-driven tones of the self-produced final track, the album caters for all head-nod connoisseurs.

Plenty of other notable names on the credits too, with King Kashmere bringing his ominous brand of beat-making to Yo Baron, and fellow UK veteran, Ghost, adding his stamp to the proceedings with some punchy, horns-laced production on Scoffin.

While Mr Synback remains the main star of the show, he is also joined on the album by his Combined Mentalz team-mate, King Latts, who drops a typically devastating verse on the Synback helmed, Definition.

The closing track, Raise a Glass, was written as a dedication to Tom Browne, founder of Receptor Records, who sadly passed away in 2015.

Receptor records were first established in 2003 and have been relaunched in 2020. The label was and still is dedicated to releasing music entertainment. Its sole focus is to be a platform for talented artists, offering access to multiple MEDIA and MUSIC PRODUCTION companies for their artists to establish their brand in the UK and worldwide scene.

Subscribe to our newsletter and get latest updates and offers.

Are you sure you want to clear your queue?

Please select the language(s) of the music you listen to.

Any cookies that may not be particularly necessary for the website to function and is used specifically to collect user personal data via analytics, ads, other embedded contents are termed as non-necessary cookies. It is mandatory to procure user consent prior to running these cookies on your website.